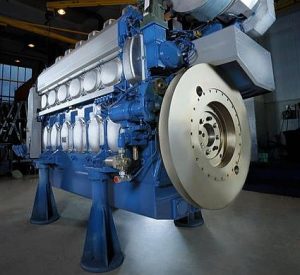 We love to keep up to date with all the latest epic machinery stories across the world, so this month we are bringing you the latest news from the Nebraska News Channel.

Falls City, Nebraska:  Weighing 155 tonnes and costing $7 million dollars, the generator has been brought all the way over from Finland. Alan Romine, Utilities Director has stated it will be used as a backup power supplier at the town’s busiest times of the year, watch the video here.

Manufactured in Helsinki by Wärtsilä, the equipment was then shipped to Houston before heading north by rail.

Wärtsilä is a known as a global leader in advanced technologies for the marine and energy industries. In 2016, their net sales totalled around 4.8 billion with approximately 18,000 employees operating globally in more than 70 countries around the world.

After reaching the town, it was necessary to haul it for another mile to the power plant, therefore the Minnesota-based haulage firm Vic’s, provided a trailer fitted with a diesel engine that moved the engine generator on the final part of its journey.

Once it is up and running it is rumoured that the generator could provide power that the city could then turn and sell back to the grid. It is estimated that the total cost of the project is around $11 million to complete.

Need your energy supply a tad smaller and a bit closer to home? Consider hiring from Top Generator Hire for your event or backup energy needs.

« 1,300 Ton Generator Bought For £1 In Auction! | Problems associated with power and flooding »