Last Tuesday afternoon and into the evening saw for some serious weather drama. The north of England and the Midlands experienced heavy downpours, and aggressive thunder and lightning. Although the weather seems to have calmed down, for now, some are still dealing with the aftermath of the storms tantrum. And more storms are expected over the next few days. 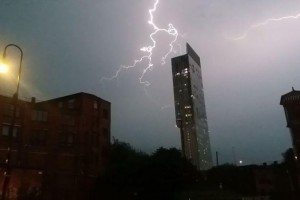 The extreme weather resulted in flash floods in Manchester and its surrounding areas, damaging shops and homes. The Manchester City game had to be cancelled as a result of the storm, and underwater football may not catch on.

Floods were just the start of it. The thunderstorm caused power cuts in certain areas of the country, and people are still without power at the moment. This could have been lightning striking our electrical equipment, lightning striking trees causing them to fall onto power lines, or the floods damaging both above and underground electrical equipment.

If you’re stuck without power or your power outlet has been damaged due to the recent storms, here at TopGeneratorHire.co.uk, we can quickly sort you out with a generator for however long you require and for the lowest price on the market. Give our expert team a quick call on 0844 504 9867 today!